What? You Gotta be Kiddin' Me.

The azalea bed won't weed itself?  No matter how I ask it to?  All 40 feet must be weeded on my hands and knees?  Really?  Poison ivy, ticks and annoying mosquitoes won't quake in fear when I kneel there with my knee pads securely fastened against the flat river rocks along the bed front?  They will still be there and I'm gonna sweat!?  Me?  Sweat?

Sore haunches you say?  Duck walking will make me hurt?  Well, then I suppose I can't charge $$$ from my annoying next door neighbors who swarm outside to watch my upturned bottom as I wrongly bend at the waist to pull the longer weeds.

That's OK.  I am done for now, but back out again after the rains.  Those will start tomorrow.  I have 40% finished now.

I have three years worth of weeds out there to get.  I was not able to weed previous to the surgery and no one could be paid to do it.  So now, no excuses dang it...I have to do it.  SO...I started. 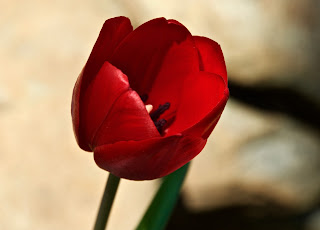 You can see the blurred (on purpose) flat river rock behind this guy.  He's blooming right there alongside the 40 ft. flower bed.

Fried chicken.  That's what a son got this evening for supper.  He had bacon and eggs and toast this morning.  A good sandwich with the works on it for lunch.  I have to go work out tomorrow morning so I'll have to get up and instead of wasting any time, gotta do my face and hair, make the bed fix and put his breakfast in the microwave for him to heat a tad when he gets up.

I'm fuller'n a tick right now. Ate too much veggies and dressing but not even a taste of chicken.  It will take me several hours to deflate.

I had fun today.  Went to the grocery to pick up some more things and I saw the Easter Bunny!  I did! He was walking along with his basket (Good grief!  Is he tall or what!!!???) We passed like ships in the night as I was headed one way in the store and he, the other.  I looked back and he did too.  I said I'd sure like a photo opportunity.  Back he came, hippity hopping and his helper too. (who had a camera).  I was going to do a selfie with Bunny and his helper did that for me with my phone.  Then he took one with his camera and said this evening forward to a week, I could stop by and pick it up at the photo counter.

Those are Bradford Pear blossoms in my header photo.  I took those yesterday.  I also took some of my pink daffodils but they mowed my yard yesterday and the daffodils are all covered with grass splattering making them unattractive for posting.

Katie said she is a member of the Clean Plate Club.  Since her dental (she just had tartar) she has not been fussy after she had to be hungry and thirst well over 24 hours.  But she will go back to being my fussy girl soon. She sure snuggles closely now too, as I rescued her from the evil v-e-t.

What did the paint give the wall on their first anniversary?

Posted by Ramblingon at 18:09 15 comments: Links to this post

Spring is ever more near!

I love the morning and though we still have the everlasting rain and overcast skies that have come about these past 5 years, nonetheless it is warmer!  AND I can move about first off in the morning and see where I'm going and not be careful of horking on the floor or accidentally stepping on Katie.  (I am not a light turner oner).

Here is a painting of an actual sign in Charlotte NC.  I don't recall where it is in actuality but it IS there.  Next time I go I will ask to go by.  But I thought it was fun to see there in the higher end consignment shop...one of two...that I went to. 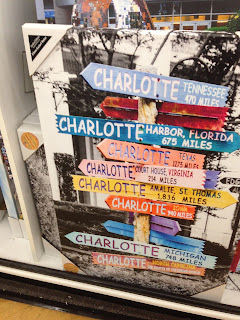 That son will be here the 27th and leave again a few days later.  Spending a couple days Spring break here to help celebrate his nephew's birthday.  James turns 1 year old on the 30th, but his party is in a park on the 28t.  RSVP don'tcha know?  I deliberately don't put "good" ones of him in the blog and never in FB.  This is the second one ever..I try for him facing away. There are bad folks out there.

Here is a display in one consignment shop.  Like the one of Marilyn Monroe, this too is not for sale.  It's really big as is Marilyn Monroe statue/sculpture.  They are placed above where we can reach. 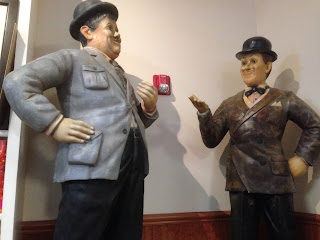 Posted by Ramblingon at 11:42 12 comments: Links to this post

I was driving home the long way yesterday after walking thru the park a couple of times.  I saw an upcoming (one off many many many!) hill and remembered how-- as a power walker and jogger I dubbed it Heartbreak Hill.

It doesn't look like much really.  Here are some pictures.  One is more or less at the bottom of that particular rise and the other is half way up.


I used to walk 8 miles a day.  Fast as I could.  So I didn't slow down for the Heartbreak Hill but good thing I was a lot more fit then because that hill got my heart rate to an unenviable high count!  Good grief! It only took maybe 40 yards after the top of it to have normal heart rate going again though.

Looking at it you would swear I'm missing a few brain cells--- but remember...this was when I was in my 30's...extremely fit and it still got to me when I sped up it. The pitch of the hill was just right if you wanna call it that, to half kill ya.  Nowadays I'd have to set the iPhone to the emergency number and just press the call button and wait for the ambulance!  :-)

Nowadays as I start walking again I scout out where best to go but with some gentle rises. I'll get better and go farther.  Up to about 3-4 miles now.

Posted by Ramblingon at 16:08 17 comments: Links to this post