I Would Enjoy Knowing

Guys, I have never seen a total complete eclipse in my life until August 22 just passed.  Partials, to one degree or another but this is my first total eclipse.

What I would enjoy knowing is: How many of you have experienced the phenomena that followed in the seconds following the eclipse ending and sun starting to show; even if the sun peeking out was no wider than a hair's width when it started to show.

What am I speaking of?  Shadow bands.  I had stopped looking at the sun as the total eclipse was ended.  I happened to glance down at the ground and it was just wondrous to see.  There were others standing in their yards and I exclaimed "What in the world is THAT"? They all said that was what they were asking too! I did not know then that the phenomena I saw was called Shadow Bands.  Here is a link telling you briefly what they are.  I'm not referring to crescent shapes through leaves or pinholes.  I mean bands...

The undulating fairly even bands of dark gray and off white raced at high speed up the street covering everything..not just the street but all of us standing out and all over the ground.  I have never seen anything like it of course.  When I wrote on the Face Book television page of my favorite Weather Man ever, Matt Hinken, he answered within 20 minutes telling me that the shadow bands are a "following a total eclipse" happening.  I looked shadow bands u, and read several other sources as well.  I felt so enriched by seeing the eclipse and the shadow bands.  A once in a life time event for me unless I were wealthy and followed eclipses over the world by traveling to them.  No one really knows why the bands occur or what causes them other than saying an eclipse ending causes them.  In other words, they are pretty much a mystery.

Who else has ever noticed them ever after a total eclipse?
Posted by Ramblingon at 17:16 14 comments: Links to this post

OH MY GOODNESS! Eclipse Day 2017 in Totality for us.

Oh guys, it was thrilling.  I have seen a few good partial eclipses (is that the plural?) but not a total as far as I can recall.  This one was worth roasting in the sun, heat and humidity for.

I did not think to get a solar filter for my DSLR.  I have a great tripod and could have done everything but I never thought to get a solar filter.  Son did, and his wife took some pictures of his view finder during various stages with her iPhone.   I have nothing but pics inside the house of what Katie saw while I was out there in total darkness.  Street lights came on of course,  Night bugs were singing...total darkness.  Our totality only lasted like 28 seconds but that sure worked for me.  It was beyond thrilling.  Everything was quiet except one tom fool  dog barking his teeth out of his head. 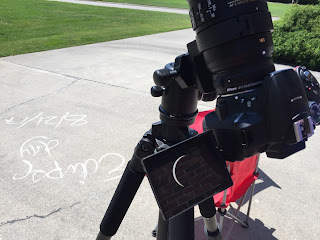 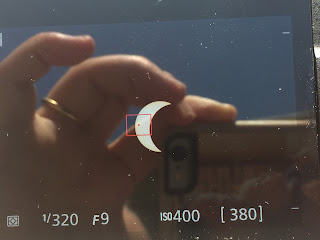 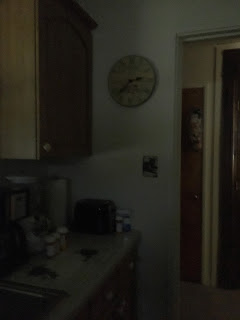 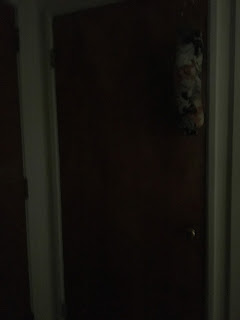 Posted by Ramblingon at 15:51 16 comments: Links to this post

Gasp! I Couldn't be Getting Older?

Seriously though, I have a new- to- me car and the seat fits me a bit differently than my other car.  Hence on my long trip to and from seeing my boy over the mountains, the back of my right knee was under too much pressure I suppose.  I did get out two times to get coffee along the way but I must have been sitting "just right" to cause an injury.  Older?  Who, me?  Me?  Nah...just a co-inkydink.

I got home Sunday evening and the next morning, yesterday, I woke with a swollen knee, painful to walk on with the back of the knee most affected.  Don't know what to do for it , and I had hopes that today would be better.  It is somewhat but still, while not as swollen, has an uneasy feeling in it.

I had a wonderful time while there though it rained like a waterfall the trip down and the entire time I was there.  That was of no consequence as I got to see my boy.  He drove me around to my various places but this time, nothing appealed to me so I sure saved $$$.

We got to visit a friend of his whose cat just  turned one year old Saturday.  So we brought him, Joey, some presents.  He LOVED them.  Including the bag as you can see.