Wellsir, I was on my way home a few hours ago.  Just got off the main four lane road and turned into the meandering road up to my home.  There was a combo quicky mart and gas station on the corner I turned.

I heard loud LOUD revving of a probably 4 cylinder engine car's motor.  My eye followed where the sound came from and it was someone in a very darkly tinted windowed little compact vehicle.  White, gewgaws and furbelows all attached to the body, darkly tinted windows as well, and revving to beat the band with it singer sewing machine engine and its poor mufflers tricked out to make that extremely loud ear-bustin' high pitched whine as they speed on by at whatever revs they can muster.  Loud mufflers/exhaust always make up for a small engine don'tcha know?

So, I had that internal warning  in my head that said "watch it, girl"!  Sure enough--- instead of stopping before leaving the parking lot, he/she gathered himself and sped out of the parking lot right at my passenger side.  Anticipation helped me to slow even more (after all, I had only just turned the corner) and I had to veer over into the other lane to its the sidewalk to avoid him colliding with me.

He/she/it sharply turned away from collision at the first blasts I issued from my horn.  I checked, and saw I could get back to my side of the road again after being run off i by this jerk.

I blew that horn.  I continued blowing it.  I blew it all the way up the road behind him...he/she turned at the nearest opportunity and I blew some MORE.  I am not anywhere near a softie as those who know me know...so I was debating whether to follow him, take a pic of his license plate, generally be obnoxious but, I did not.  I went on home.  Besides, I had HER waiting for me. 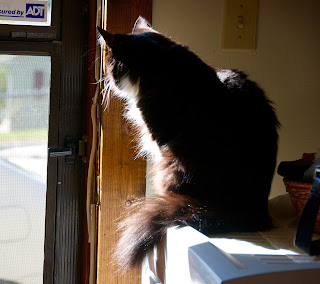 Posted by Ramblingon at 18:08 13 comments: Links to this post

I cut the cord with C-o-m-c-a-s-t and no longer have their bundle of services.  It was just under by 6 dollars, $200.00 a MONTH for just internet, phone and TV and all their add on fees and "taxes".  TV was basic.  No geegaws, no extras, no on demands, no nothing.  Just plain everyday channels.  Of which I watched three of them.  $200.00 a month.  Times that by 12, and I got to pay $2400.00 a YEAR for that.  And the price kept rising at least once a year...creeping up and up.  So, I asked for a break and they didn't give me one.  They had, a few years previous and I guess that was the only bone they were going to throw me.

I do have internet by them, and it is very high speed and high in cost too. But at least it isn't nigh onto $200.00 a month.  All this to say that as a consequence, I no longer have a landline.  I have my cell and a VOIP phone. So, I had to cut my alarm service off as it needs a landline to function.  I have skated by a month  but needed to re-start with another company.  I have a new style now and I am very pleased.

My new system will be installed in 24 hours hence.  Everything costs money doesn't it?  (That was a newsflash wasn't it)?

These lilies are here to illustrate that you don't have to be a celebrity or rich to be beautiful in the flower or in our world.  Look at these lovely ones.   They are so-called common flowers, not the ones I usually photograph but they deserve to be shown off just as much as any "fancy" flower.  I still can't get over all the colors on that hydrangea bush! 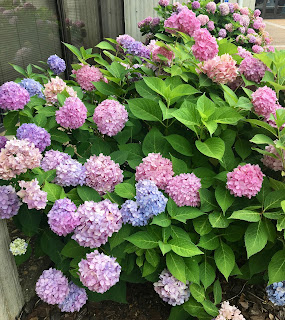 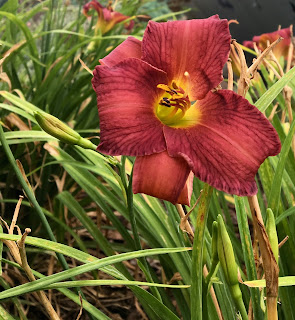 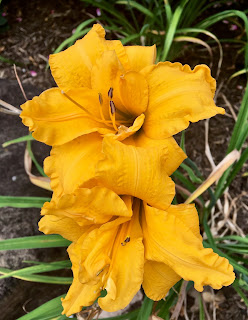 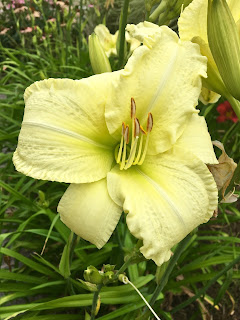 Posted by Ramblingon at 13:57 12 comments: Links to this post

Well, me, my daughter-in-law and my grandson were all in a big mall yesterday.  I wanted to stop by M.A.C for lipstick before going to Pandora and then we'd have lunch.  Stopped at M.A.C and the associates were very busy.  No use standing there especially with a very active two year old toddler so we went on to Pandora where it too was busier than hen's teeth.  SO...we went on the the food court and had lunch.  A Philly cheese steak but with chicken. Surprisingly good.  After that, we headed back to see if things had calmed down.

I stopped at the makeup counter as we made our way from lunch,  and started telling the ladies about the lipstick color I wanted and its name.  They could not find it and went through a lot of trouble for me.   I went through all kinds of talk describing the shade I wanted.  They kept looking for it sure they'd find it.   Daughter-in-law said "Don't you want to be at M.A.C. counter"?  I said "yes" and she pointed to the Lancome  sign.  Oh how embarrassing and how funny.  I laughed so hard and apologized for the trouble I put them through.  M.A.C.was next door to them so I squirmed off in that direction and got my lipstick.  I see the price went up to $18.00 a tube instead of the $14.00 I was used to!  I may have to re-think my lipstick. It was embarrassing but I am still laughing.

Got a new charm for my Pandora bracelet that one of my sons started for me.  This one is starry sky..there are three varieties of that charm.  I chose the one consisting of two parts,  a gorgeous shade of blue disc as a background for sparkling stars that will overlay the disc. 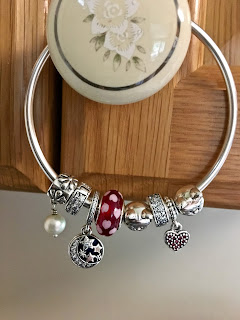 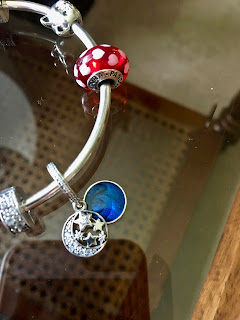 Posted by Ramblingon at 17:28 20 comments: Links to this post

You know, sometimes these days, I get the feeling I am still asleep.  Definitely not awake as I don't recognize  anything.  Perhaps I will wake up and smell the coffee one day.

I've started walking again.  Dr. said if my Achilles tendon does not bother me overly much,  just go for it.  I have bursitis in that tendon now.  Have had for some time, but I made it worse with the too tight grip of a heel strap on a new pair of sandals.  I did that to myself.  AND learned a valuable lesson as so many are learned...too late.  😱

I have been trying to force myself to get into the bathroom linen closet and clean off that third shelf.  I have a gigantic rag pile festering there consisting of clean but horrible looking and in bad shape pajamas and night gowns, and with some house cleaning type old dead towels thrown in. I haul those out for cleaning the bathtub as they are so soft.  They sure don't make towels like they used to.  These are wedding gifts to me. Pretty darned old. They look horrible and they are ratty, have some  holes here and there but they are still usable as cleaning things.  They have lasted forEVER!  One could also use them (one of my sons does this) for a towel to dry his head after shower and shampoo.  I doubt any I have in there the past ten years would survive as well. 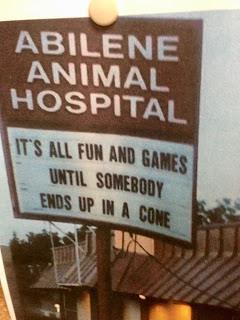 pee ess:  That picture in the header is a Coneflower and a bee of course with lots of pollen on his britches.  I got that at a place near home here.