Goodness.  Got into bed last night...great.  I was sleepy.  Then, I slept well until 4am when I had to rise for a good reason. Too much water before bed.  I'm fortunate in that it rarely happens to me.

Moving on, I got back into bed and the storms with thunder, lightening and pounding rain brought on the all-too-often power outage.  That was just after 4:15am.  I tried to go back to sleep. Nada.  I started dozing off and on however.  Better than nothing.   The power going out and staying out  stopped my little white sound machine...I am used to sleeping to that noise and if asleep I wake instantly when it stops.  Well, I laid there some more..off and on dozing going on when the house phone rang.  That was just after 5am.  I had to answer it as it could have been family.  Had to turn on the light and try to get the phone closer to answer.  It wasn't family.  It was an emergency notification whose notifications I accidentally had turned on in settings of my iPhone, of an APP I have.  SO...I laid there with an occasional visit from the Boss until she got insistent at 7.  I got up thinking to dress and make a coffee run as there was no power--- when the power came on!  Not 5 minutes after I got up.  That was great! I made coffee first.

Now, if Comcast would fix what's wrong with the wifi signal I would be most grateful.  For three weeks wifi comes and goes every few minutes.  My computer is not happy I am sure with the constant forced off and re-starting so many times.

The rain has been constant as usual.  A month ago we did have about 10 days in a row with NO RAIN!  I have no idea in the world why for three..almost four years the rain here occurs more than dry weather.  I looked it up.  More than half the year is rain.  There are many cloudy days when it isn't raining  Sun is rare.

Odd for this State as we are not coastal.


What's going on with you all?   Sent this picture to a friend a few days ago.  The start of some home made chili with my own green pepper I picked out on the deck in my container garden. Just got it started there.  Wound up heavy handed in the chili powder addition. 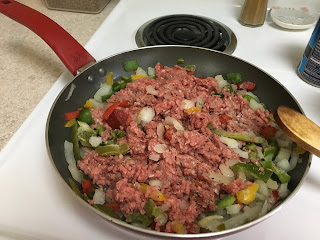 Posted by Ramblingon at 11:11 14 comments: Links to this post

That Will Teach Me

Each time I try this that I will speak of next, I always think...what if you drop it? But I do it anyway.  No more.  What is it?  Well, it's me getting two eggs out of their plastic container in the refrigerator that holds twenty four eggs.  Why that can be a problem is this:  I pull the container of eggs down to the space created between refrigerator and freezer...I use one hand to hold the container steady and the other to demonstrate my lack of common sense.

And each time I do that I think to myself...what if it slips?  ALL of the eggs...the two you have in your hand?  ONE egg?  Today I found out.  It makes a mess.  I had one egg in my eager hand.  The other  I was plucking out of the container with that same hand was too soft in the shell as it turned out, so my thumb broke right through the shell just lifting it out of the box.  Of course, it oozed down to the space between the freezer and the fridge.  Did a great job of multiplying from a single egg to what looked like (and cleaned up like!) a dozen eggs.  One egg seldom made such a horrible mess surely.  And whose fault?  Mine- for knowing full well I was just asking for it...and I got it!

Not going to do THAT any more.  The whole container comes out from now on.  Eggs will be retrieved and put safely somewhere while the container goes back.  Learned MY lesson!


Posted by Ramblingon at 15:45 8 comments: Links to this post

I almost said "Kitties!" right here!.  My boy got me back into my blog.  All I could  do was Katie's bloggie for which I earned Katie's thanks, but I could NOT get in here to save my soul.

He went in to my blog which I could NOT do.... not for anything, and he got me turned back around.  Having a Software Engineer for a son is an extra wonderful thing.  Aside from the wonderful fact that he and his beloved of us all wife made me a first time gramma!

Anyway I am about to go out and roll in the grass or something and maybe eat some too.  I'll find the nip patch over in the side yard  and bring some in to share with Katie--- I am so happy.  YES!  Happy Dance.  This logging in has been awful for three or four months.

Now I don't have anything else to say for pete sake but I will regardless.  I usually have a "things I'm suddenly tired of" list or some such as that.  You know, hackneyed phrases like "at the end of the day" "going forward" stuff like that to whine about having to hear constantly.  But I can't gather up any in my delighted mind (over getting into my blog again).  HOORAY!

OK..I'll quit for now.  I'm giddy.  OH  OH  ...Katie made last night furry interesting.  She rolled over and put her nose and some whiskers in my ear in the middle of the night.   Hearing kitty snoring up close and purrsonal is not a good thing.  I had to request she move.  But she came back.  Better than the night I awoke and found her stretched over my throat!  Her waist was draped over my neck/throat.  May, talk about breathing probs!  She was sound asleep.  I was too until a lack of air woke me up. 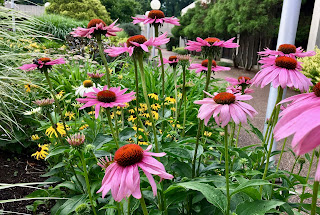 Posted by Ramblingon at 19:55 6 comments: Links to this post