Hazel.  Meaner than a striped snake.  Not worth killin'. The worst of the worst.  Just bad!  Would't pull her outta a burning building if she were in one!!

Oh maybe 15 years ago, a girlfriend and I started out for our long LONG walk and jog...usually a good 7 miles... and the twilight we began in turned into dusk.  Dark.  But we kept on jogging up and down all the hills on the sidewalk.  I was in good shape then...now...not so much).

So, we were trotting along down the sidewalk in the dark except for street lights here and there (the pink sodium vapor ones).  and WHAM!  My right thigh connected with Hazel.  Who is she besides all the things I said in the first lines here in the blog?  Easy.   She is one of many named by Penny and I  fire hydrants in the city situated wherever the City decided to put them-- and among them is Hazel.  Ugly squatty Hazel who is still right smack in the middle of the sidewalk.  I might add all of our sidewalks are paved asphalt. 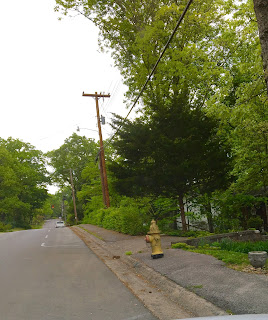 We neither of us saw her there lying in wait for un-suspecting and silly in-the-dark-joggers.  But she was there and man, she nailed me good!  I had an almost football sized black bruise on the front my thigh by morning.  I limped back home of course after colliding with her.  I went nowhere for three or four weeks and though the bruise still looked horrible there was some green forming around some of the black/purple edges of the bruise, so I started out again just walking, not running, and only for a few miles.

I never went to the doctor.  I did not apply the RICE therapy to my leg as it is spoken of as I  had no real knowledge of it.  But weeks and weeks later I got better.

Hazel is on my list to this moment let me tell you! Just looking at her you can tell with your bare eyes her vicious nature.

There are by the way far more female hydrants in town than males ones. Go figure! .  Harry was farther up the hill.

Just sayin'
Posted by Ramblingon at 16:31 14 comments: Links to this post

One of those weeks. 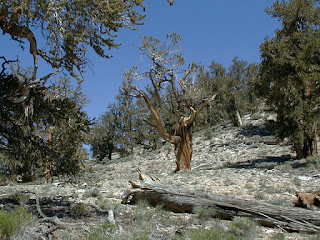 Here is a Methuselah tree.  Isn't it magnificent?  They won't tell you THE one that is the oldest for fear that people with destroy it or harm it.  But it is one of the Methuselah trees of several in the frame of the picture.

May we grow old like this first in friendship and love and faith...one with the other.
Posted by Ramblingon at 13:15 11 comments: Links to this post

Whew.  Finally got all the weeds that I can get at  pulled and disposed of over the fence and into my woods.  I have fertilized the azaleas with their azalea food and gave the same thing to my gardenia.  I hope everyone does well.  We had some substantial rain right after I fed everyone including the one remaining rose...and it all seems to have seeped into the ground.

I had Preen left over from a few years ago and spread that thickly where I had weeded.  It is so danged nice to look out of my front door, stand on the porch, look both ways and NO WEEDS!  Took me 4 days to get all 40 ft. finished.  I could have done more each session, but why.  I needed to get my wrists and hands/knuckles used to hard (trust me)  pulling and labor.  Already doing much better on that.  Good to reawaken unused muscles and sinews.  My back is doing pretty well and so are my squatting muscles.  Good thing as they really went through the wringer.

A cat I know crawled into bed with me  last night (of course).  I woke to turn over and there was a back pressed into my belly.  My pj top had risen a bit and she took full advantage of the literal body heat.  Even if she is hotter than me by temp, she said I sure beat nothing as it was chill in the house last night.  I stayed where I was rather than disturb her.

Have to start thinking what to fix for supper tonight.  And I got great news yesterday after a test  was one which shows me  how vastly I have improved.  No wonder I feel so well.  I'm the usual whirlwind I always was.  It feels so good to go from one work project to another to another and accomplish things.  I think I took 15 years off my feels-like age.

Loved the walk this morning  Will start increasing the length week by week.  I will not get back to my 8 miles round trip per day I imagine but you never know.

I put my hummingbird feeder out.  I imagine it will be several weeks though before mine show back up.  But I'm ready!