The Mockingbird and the Squirrel

Guys, this morning on my walk I saw something that reminded me of an event here at my house back in the late 80's.  I was whuppin' it trying to make it back to the car after the second time around the civic center park.  I heard the Mocking Bird and a squirrel's chatter.  I saw the Mocker was chasing the squirrel and dive bombing him incessantly  with no let up.  He beat the squirrel to the ends of the earth.  The squirrel was running the fastest he could.  The bird won!  Once upon a time when my boys were just in grammar school, I heard the loudest screeching ever!  I hurried to the deck and saw my one boy being attacked and pecked by Blue Jay parents.  Both of them.  He was trying desperately to get our Robin (our 6# Tortie...our last cat to be allowed outside)  to let go of a fledgling she had in her mouth.  The Blue Jay parents, and my sons were all after her.  She finally gave up and the parents were left along by Robin as my son marched her straight into the house.

I'll bet that squirrel will think twice before he disturbs a bird nest!

I took delivery of a new vacuum cleaner yesterday.  OH. My. Stars!  There isn't a better one out there.  I let my Consumer Reports Buying Guide choose for me.  I was looking for something to help with Katie Isabella's long long black furs.  They are/were embedded into the light carpet and made the carpet look dingy despite my vacuuming every other day.  Especially the living room and her room (computer room has the majority of her toys).

It was nothing to assemble and man, when I fired it up..I want you to know I have never EVER seen the carpet looking like this since it was installed!  It's several shades lighter! The dirt cup filled to the must empty it level after I got thru all the rooms.  And that was after I had vacuumed the day before!!!  This vacuum only cost $129.00 + our horrendous TN State sales tax. Worth every cent and more.  It's so quiet that Katie didn't run!

Here.  Found several beds of iris on my walkie. 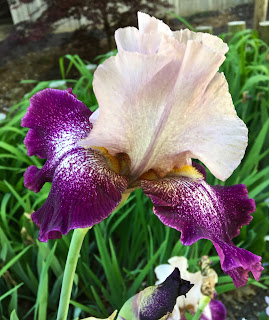 The header today is the front of my home's azaleas.  Hope you like.