Comcast Problems in My Opinion

Friends, fellow bloggers, I once had bad service from Comcast on a continuing basis including rude service people in my home.  Happily that poor service has changed very much for the better.

The time that stands out most was when I had a bad accident in 2011 and could not really walk for several months and at the same time, I had a broken right wrist with a cast up to my bicep.  I was helpless, alone  and my phone which was powered by Comcast, was not working except intermittently.  I was in my bed a lot after that accident as I could barely walk with the severe injury to my legs.  My legs were actually black in color and swollen to one and a half times their size...never mind my broken right arm.  I had called Comcast customer service about the phone and mentioned I was helpless in the house; and while they said the usual words, nothing was done.

I wrote of that worrisome trial I was enduring with them here to you all  in my blog because, as I told all of you...a lack of a phone left me helpless here alone in my home with just Admiral attending me.  (She was my Tortie cat at that time).  If the house had caught fire I was trapped and couldn't call out.  If I took a turn for the worse--- same scenario

Now,  my complaint this moment is that my bill shot up to just under $200.00 a month.  That for a bundle of phone, interest and TV.  No packages of on demand stuff, movies, shows and sports.  The basic cable stuff is all as I don't watch too much TV.  Yet the bill shot to just under $200.00 a month.  That is $2284.68 a year just to watch PBS, and three other channels.  I Get internet and phone also.

I knew the person I spoke with this afternoon was in an out of this Country call center who would nor could do anything, and they didn't except to offer $20.00 credit to wait a month before I did anything if I was going to.  I thanked her and refused the twenty dollars.  It wouldn't be right to accept it.

Folks, this is just too much to pay for so little.  I will likely have to do without it all and use my cell only.  I don't want satellite-- as we know how that might be.  I don't want you-know-who out there for an entirely different reason.

Comcast actually improved wonderfully since 2011.  Seriously.  I can't complain about anyone I have spoken with on the phone nor the few techs who have had to come here to the house since 2011.  I recommend them.  But if you don't have the money, you need to think it over.  It is very expensive. And they tend to add charges at least once a year  think. I think many of my friends have you-know-who. My accolades for Comcast are sincere.  Just their price finally got to my personal breaking point.

Just talking guys.  Thanks for listening  I'm not knocking them at all.  Conversely, I compliment them on their service these days which is quite good.  But I will have to bid it adieu.

Posted by Ramblingon at 17:11 17 comments: Links to this post

In Case You Ever Wondered

When I write a blog, I do it with humor as I am usually in a great humor and besides, I love to laugh.  My high flown grammar in the past blog that I just did a few days ago is an example.  Believe me, I don't speak that way...it is only for a fun and a smile and making a joke on myself at my own expense usually.

This has begun the third week running now with rain or heavy overcast or both... no glimpse of the sun, not in three weeks.  The weather cast said this morning the same depressing thing.  Rain and or overcast all week and into next week which will then start a fourth week.  It can gitcha down. Here it is  always gloomy--- with a five year pattern of nine days of gloom and two days  of sun or partial sun and then starting all over again with the seven to nine days of rain and/or overcast.  Un-endingly until this late Spring where there was sun every day for months.  It started a drought which wasn't that bad but there were forest fires all around.  Those were set by teenagers.  However the foliage was dry that is certain.

This pattern goes on all twelve months of the year.  No letting up.  That strange weather high we had for several months was just that, a strange but fabulous happening. Sun every day!!!  For weeks on end!  Oh well.  Could be worse and often is.  Ice, snow, tornadoes, hurricanes, etc. 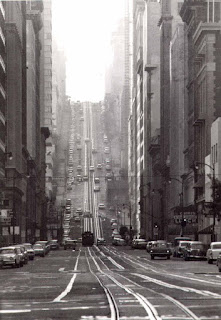 This street inSan Francisco is unbelievable,  How can you drive up or down it?  It's an old old picture.

Posted by Ramblingon at 12:05 13 comments: Links to this post

Well That Was No Fun

You know perhaps how it can be.  You climb into bed, get settled with a pet on your chest, *gasp for air* and eventually you are released from petting duty and turn out the light.  *Cue slumber thoughts* and you start to drift off after announcements by said pet who hopped down and set about bringing in three or four of her most favorite toys.  Each one brought to the room is hailed ceremoniously with clear toned announcements as they are laid on the carpet by the bed or in the bed.

One is vaguely asleep when the toys are heralded.  Ones eyes open however,  and one wonders why every joint in the body is sending out semaphore signals just about, proclaiming PAIN!   My knees, hips, lower back, ankles, elbows were reminding me of those old TV commercials where they show pulsating red circles radiating out from the joints and then, they proclaim their remedy to swallow or rub on.  My joints were killing me.  That doesn't happen to me.  But it is now!  All new.

I have no idea what happened to bring it on as nothing new took place at all during the day.  I laid there in the beddy, all covered up to my chinny chin chin, and a pool of black and white satin was in a soft circle, purring very loudly at the side of my head.  I misliked the idea of moving  as it would disturb her.

There was no help for it however, I found on reflection as I was in so much pain I could never have gone back to sleep.  I did not want to disturb the sleeping soft guardian at my head but... one must do what one must.

I slowly moved the covers back from me and swung my hurting legs out and down to the floor.  Those  legs along with my hurting hips and ankles and knees carried me to the kitchen where I took two acetaminophen. I could feel the lessening of pain as I settled back into bed--- it was that quick.

I was amazed that my little kitty girl was still there where I left her as she usually leaves when disturbed.  She sank back into my neck and by my face with renewed loud purring and we both went straight back to sleep.

It was a good night,  but fraught with work dreams.  Those can be frustrating as things aren't the same in dreams...you KNOW they aren't,  but you have to "make do".  I had many fragmented work type dreams.  I am one of those who love(d) the profession and found it fulfilling on many levels.

Got to work out though this morning...out into the 3rd week of unceasing fog, rain, overcast.  The mist stopped later so I got a good walkie in afterward.

I have been to work out, then to the grocery store, then up to the park to walk, then to the ATM, then home where it's late enough I made my lunch smoothie.

It's extremely simple to make.  And no yucky green stuff in it either.  Ewwwww. I have four main flavors I make and all of them are fairly close in calories with the non fat milk making 90 c. itself.  Yesterday and today I added canned tart red cherries and some of the juice too, as it adds to the cherry taste of course.  So, a cuppa non fat milk in the blender, 2/3 cup tart red cherries with some juice, 2 tablespoons (measured) of Hershey's Lite chocolate syrup.  1 packet of Splenda, 6 ice cubes, and blend.  Oh my goodness, it's good and not many calories at all.  Green veggies need not apply.  I do the same combination with strawberries (fresh only) as a change of fruit, or a banana with the chocolate of course.  There is chocolate syrup at 40 calories in each of my fruit smoothies.  I love canned Pineapple chucks in their own juice too with the chocolate.  Same combo of milk, chocolate and sweeter which is one packet of Splenda or whatever you like.

It is a chilly, damp and windy day.  But though I want to say I want sun still...it's a day and something to be very grateful for!

Tomorrow I get to see my daughter-in-law and my grand baby!  They always spend the morning.  Can't wait.

What are you all doing?  Watching the clock with me till it's Spring?

I never make resolutions.  Not since I was a girl in the single digits of age.  BUT I do relish the idea of a chronological fresh start. This is the start of another year in which I continue my journey to better physical duration just as I used to have once upon a time.  Nah, can't do that well but I am certainly better than I was a year and a half ago.  It took perseverance and some amount of grit to do it.

One thing has stood in my way a few times since I really made an outside effort at improving my stamina instead of just working out--- and that is the very hot and humid weather when it arrives Summer. Not good for me really to be doing a lot of walking in that due to my physical concerns.  (which are improving hand over fist).  And when it is freezing and below freezing with the wind blowing, no, I stay away from where I walk outside.  Instead, I try to get some time in at various big stores walking but that walking is slow... whereas outside I can really speed along.  Any activity counts, but the faster the better.  Those are called "active minutes" on my Fitbit and I try to rack 'em up.  I am proud of the progress I have made with my outside addition i.e. walking in addition to my workout and store walking.  It has made a big difference in my endurance.  So Happy New Year to me and Happy New Year to each of you.  I wish we could all get together, I swear I do.  We could have a heckuva BBQ... and if our bellies don't bust wide open from all the food, we can jog it off. 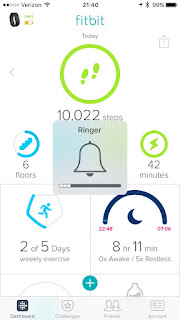 Posted by Ramblingon at 15:08 23 comments: Links to this post