Thank goodness for the sun the past 2 days after a week of rain...(of course).

Yesterday after an hour and a half at the gym, I came home and did the housework.  Didn't get to do my usual cleaning this weekend past as o, course we weren't here.  But I'll gitter done this weekend as someone is here now.

Yesterday I finally broke down and did the ironing that has piled up since January if not a while longer.  I got out the board, iron (naturally) hangers and all those articles of clothing.  Most were mine...some were Katie's brothers' clothes.  All done.  Went out and did a bunch of stuffs  after that and wound up with close to 15000 steps.  Today, house still a mess-- but it'll keep.  The yard was mowed, weed eated, blown, and the bridal's wreath bush, which had grown taller than the fence, say,  a good 7-8 ft. tall and had overflowed into the neighboring yard... was cut back to about 3 ft. high, and it's girth reduced.

My battle with the tiny piss ants..well, to parody the song...I fought the ants And the Ants won.  The pest control person came and sprayed the perimeter of the house foundation with (I looked it up) the cadillac of ant killers.  Well, THEIR mama's didn't raise no fools.  The crappy  things came into the house in waves.  I didn't have any spray, so after two weeks of trying to rid myself of them inside. I told the pest control person who came back again today...I'll see how that goes.   AND to beat it all, I was hurrying to get a whole bunch on the counter  slamming down on them with wide masking tape. And in my haste to move the coffee maker in time to get them, I cracked the carafe.  Leaking coffee.   Ants were slapping their knees at my quandary. But,  I didn't like the coffee maker which was inexpensive and showed it...so I just pitched the whole thing and got another.

Oh, and regarding hairball horks after a good brushing...I discovered  how to pretty much not have that happen.  I used my human hairbrush which has become HER human hairbrush  after I finished brushing Katie; and furminating and slickering too. I  pass the human brush very gently, just gliding light as air over her furs That took up all the loose furs you can't really see the is left after the brushing.  No horking.

After all, they will take a bath later and if they bathe  and ingest all those loose furs...we get them back. 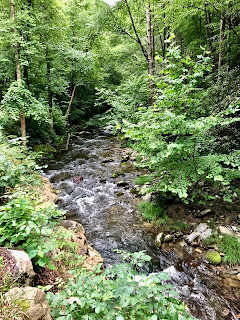 Posted by Ramblingon at 15:36 9 comments: Links to this post

Boy Did We Have a Good Time

Uses, meaning me, all three boys, my daughter-in-law, the grandson too.  We all headed off to Cades Cove  in a rented van.  We left early in the morning and one son and myself got back to  my Katie's house at 7 pm.  She was outraged, starved, emaciated, strung out, seething... and again, outraged.  BUT, I got her fed before anything else...then, danged if we didn't left her again and went out to eat. Got home again an hour later.  She never let me go.

One son left to go back to his home an hour ago, and then, a week after today, he heads to Uruguay as a  Fulbright Scholar.  I am very proud of him.  But I always worry until he returns again to this Country.

Here's a few pictures for ya if you would like to see them.  Only saw one bear near a primitive Methodist Church which still standing and preserved.  No joke that we would have walked right into him if I hadn't spotted him about 75 ft. away in the woods.

Things I Think About


So.  The header picture was taken at the arboretum a few weeks ago.

Ya know, I get so giddy with being happy that the sun came out since we only see sun just under half the year; and I get so quiet when it keeps raining all the time I wonder if I have that lack of sun thing they talk about.  Is it called Seasonal Affective Disorder?  Bright light doesn't help me though.  Has to be the sun.   Cause you can have bright light inside, but look out the window and it's gray, dark and raining. 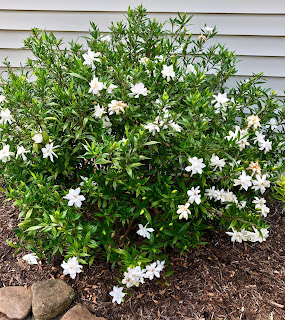 Here's my gardenia bush.  Just two blossoms I cut scented the kitchen and the living room even after they yellowed and died. Very strong perfume still. 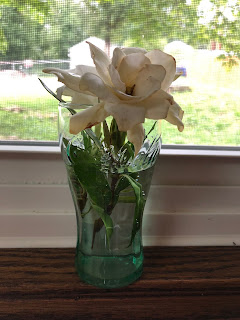 Posted by Ramblingon at 19:15 9 comments: Links to this post

Oh it was glorious out there yesterday.  After a solid week of rain, when I opened the blinds, sun.  AND it was in the high 50's.  AND the humidity was low.  Ain't nothin' better than that!  Of course, it's raining again today.

I started out to the gym..I almost decided on the park, but I went on with the gym.  After I left the gym I went to the civic center where I got iPhone pictures of their annual plantings for the spring and summer.  I'll put some in, and the header will change too. The bees were so many!  I loved seeing them.  I don't fear those.  Wasps, hornets..yes.  Regular bees so to speak, never.   They come up to my face sometimes and I like to pretend they are greeting me.  They, as one of the bloggers said yesterday in FB, go on about their bee business. 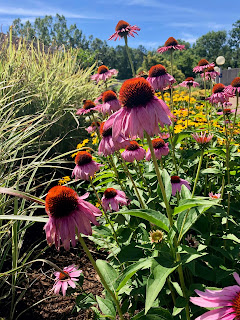 They are all over these cone flowers, but you won't be able to make them out.  I love it when they are coated with pollen.  I have quite a few summer pics thru the years of bees just loaded up with pollen. These guys weren't coated yet.  I caught them early.  Got me in some fab walking there too looking for flowers and insects to photograph.  Brought the DSLR and left it in the car in case something warranted having it with me in the flower area. I could have gone back for it . 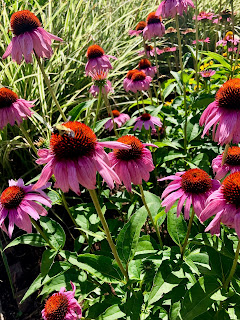 Burning question for you.  Is there anyone else besides me who almost never fails to place canned goods in the cabinet with their labels facing away?  Seems like the law of averages would have me picking up at least 1 and place it in with the table facing out.  But no.  I know that one could circumvent this by simply looking at the can in their hand BEFORE they put it in the cabinet.  But I don't wanna be bothered.  The law of averages snickers nastily and makes sure they, the cans,  are turned away from me.

Got to get cracking.  The day is ticking away. 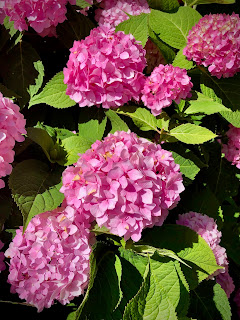 Their snowballs...
Posted by Ramblingon at 09:05 12 comments: Links to this post

There's More to Life than Exercise!

Good Golly Miss Molly!  I didn't walk yesterday though the weather was just right to not sweat like a walking bucket of water.  Instead, I finally took a day off from it and headed to Cos*co and laid my wallet down again it seems, buying stuff I need, yes, but whoa nelly.  They still cost money, all that stuff.  I came home from that, but not until I stopped off at the arboretum on the way back from The Big City where I had been spending money like water. The Arboretum is run by and owned by the University of Tennessee.  It is extremely nice.

They have some wild flowers planted at the visitors center area.  I had my DSLR with me knowing I would stop off.  As I was looking them over  and walking slowly and standing here and there peering in the bushes...I interrupted a private moment it seems. 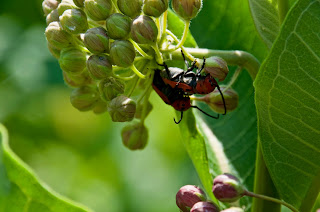 Farther on, I found something else that reminds me of the snowball bush (see below here) ...I forget the snowball bush's real name, but it wasn't.  Do you know what this is?  It's not cultivated or it wouldn't have been there. 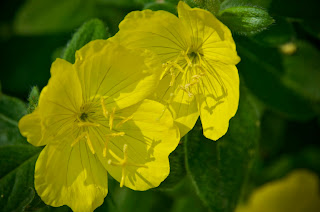 These guys were there and many others.  Don't want to bore you overly much (she said).  I will add I took the header picture in a garden near here. DSLR and not the phone.

Anyway, the day was blessedly great from the minute I got up till I went to bed.  I loved just going to the City...getting some things I needed, going and finally using the big camera...coming home to see what I got.  Going back out to get a few things like soft drinks and milk...back again to lift weights, reading the rest of a superb book...and so on..into the sunny perfect afternoon and early evening.  A day I was particularly grateful, and particularly glad to be alive.