Guys, Ladies, I am grateful  for another year.  Had a birthday last Sunday.   I try to use that gift of another year each day, but particularly now that it is not so grueling hot and humid.  I am out on a brisk walk after my workout unless something else stops me.  My very hilly street (all of them are hilly in this town though) is not practical for my walking routes nowadays as I can tax myself just so far in climbing hills and keeping up a pace.  I therefore go to a fairly level park and go for it!

On my birthday I was on my way home from seeing my middle son.  He usually invites me to his home on that occasion.  Sunday, on I-85 I was rocketing along at just over the speed limit when I became aware that there was a car exactly on my bumper...close enough to tap me I would say.

I had just passed someone so I was in the passing lane still.  Not able to go back to the right-most lane until the vehicle next to me either sped up or slowed down.  The dimwit behind me used the very narrow place that suddenly opened up to my right as the car beside me did move faster, and  dimwit shot around me nearly shaving my bumper...and decided to gift me with a "greeting" on that, my birthday.  I certainly gained the knowledge that he was very angry with me for daring not to crash into the car next to me thereby letting him by.  Had I slowed down so I could get back into the right lane sooner...as he was magnetically attached to my bumper...he would like have shot me if he had a weapon.  He was in the way of my trying to get out of HIS way.

He has to be proud he got around me at last and expressed his thoughts.  Way to be respectful.

Me, I continued on...not angry at all nor bothered.  I know what is important and that ain't.

I took these two photos with my phone way early this morning.  I will get out there with the Nikon in the morning assuming the builder and home are still there. 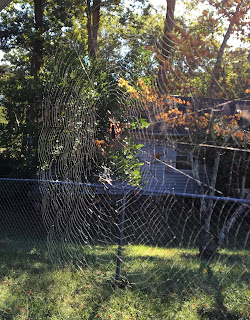 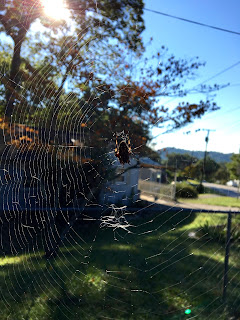 Posted by Ramblingon at 16:27 16 comments: Links to this post

Up and change the sheets with Katie's able help after feeding her and opening and closing the front door multiple times for her.   Travel to the kitchen again and remove whatever is on the counter surfaces and clean and shine the counters.  Ooo la la.  I love shiny counters.  Put it all back (not much...I do not like clutter) and begin sweeping, then cleaning and shining the floor.  I thank the skill of my surgeon every single DAY that I can do all my housework and not draw a single troubled breath from cardiac issues.  Wanna wrassle?  I think I can best ya! Then, I took that flat 2 pc. drainboard I like so much apart and cleaned IT.  No fun. And clean the stainless steel sink.  Change throw rugs. Set the kitchen to rights.  Travel to the bathroom and clean the tub and surround, potty, vanity and floor.  Travel back out and get the vacuum going for the full house as I always do.  Empty it and wax furniture after swiffering it first.  Clean all the glass table tops and anything else.  Already got the bathroom doors, both  of them cleaned , inside and out. (finger marks from everyone not using the knobs). Dust the tops of all the door frames in the house.  Already took everything off the dressers and bureaus and spit shined and re-did it to where it was. Did the wash, folded and put away.  Have to iron three items.

Shampooed my hair to take up where Katie left off last night.  Going to take a curling iron to it here in an hour.  Had lunch.  Got more to do but waiting till my toasted cheese sandwich settles.   I also had a  made with fresh fruit, smoothie.  I add two T of lite chocolate syrup to it (20 cal), non fat milk, ice, blend and oh MY it's good.

Ya know, when someone who is driving is going to turn a corner (and of course not bother with a turn signal) it would be refreshing that they make their way through the turn in a timely manner rather than come to a complete stop, then turning.  Nope...no stop sign involved nor any traffic light to make them stop.  Just a very very slow driver who seems timid.  This is usually at a business where the driver wishes to go into a parking lot.  Ah...but I duly note that no one made me Queen nor Supreme Ruler who gets to say who does what, and when.  Drat!

It's a bit  more aggravating when you are waiting to make a left turn at a traffic light with no left turn lead and you see that the opposing traffic has a vehicle approaching about to that point where you cannot safely take a chance on turning until they go by.   That vehicle you're waiting for to come on through so that you may turn left surely has a brick wedged under the gas pedal so that the accelerator may not be pressed to afford more than, say...oh, I dunno...perhaps 15 mph until they labor through the intersection.  (Where you have waiting, hoping for a chance to turn left before the next red light).

I also have noted that I don't get to say that MY timetable is more important than theirs!  Double drat!

At least it is not as bad as being behind someone who is texting.  They continue to sit at the light when it's is green.  They weave and wobble as they proceed down the street after some heartfelt honks of the horn at them.  However, I would rather be behind them than approaching them from the opposite direction as you never know where they will veer off to.  That thought just brought a memory from "back in the day" when mobile phones had not yet been made available.  I have seen folks with a newspaper propped up on the steering wheel hurtling down the interstate.  They stayed in the "slow" lane...you navigated around them.   Also, back then I used to see more men driving with their wrist stationed  atop the steering wheel.  Naturally I never do anything wrong.  I am total perfection all the time.  Sure!  I have more than my share of aggravating driving ways too.  I just won't talk about 'em!  😊 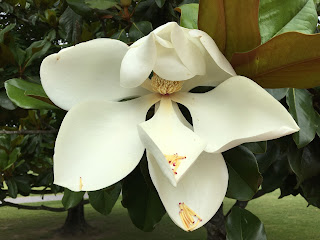 P.S.  In my header, I took those pictures of those Indian Blanket Flowers...a form of daisy... several years ago.  They are one of my favorite flowers.  I will bet I would never say a word to one of them if I had to wait for them anywhere in the world.  Love them.
Posted by Ramblingon at 16:25 15 comments: Links to this post