How Could I Forget THIS One?

"Reach out"  The media always reaches out.  The can't possible just contact someone....no...they reach out.  EVERYone in media  uses that phrase.  Reach out implies you are feeling empathy, sympathy, concern, all the other terms that I will spare you from.  "Contacted" is more like it as far as the media's use of the word is concerned.  The false implication of concern  they don't even realize they are doing, is annoying.  Gosh I'm on a roll here with overused inappropriate phrasing in media!

Meanwhile, I am pruning back, or trying to, my use of exclamation marks from a constant THREE of them when I wanted to emphasize something to a mere one!  Now, if I could prune back my over-use of commas I think I would be cited for some writing awardie.  I am the comma QUEEN!

I have aways used ellipsis throughout my writing of anything.  Stories, blogs, you name it. They come in handy but I had to break myself from too many of them as well.  And no one can write in phrases more so than I.  I have no idea where or when I picked up that habit.  Wait.  I think I do know.  It was during  my career where a written documentation of all conversations, telephone particularly  or otherwise was of vital importance so I invented  my own shorthand out of necessity.

Here..have a cookie with that coffee and you over there, pull up a chair.  Plenty of room here at the table.

Whoops...carry on while I steam clean the bathroom floor.  WAY overdue for a good thorough cleaning.  Like Arnold, I'll be back. 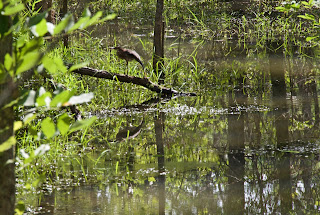 See the heron?  I got him (along with the chiggers) in the wetlands.

Posted by Ramblingon at 10:00 11 comments: Links to this post

Guys, I loved all the additions you all put in, in the last blog.  One I may have forgotten...too lazy to go back and look right now--- is the phrase "change up".  Please.  Just say change.  WHY is the word "up" such a grand additions?  This awful phrase has been going on a good six years or more.   But who's counting, right?  The ol' "having said that" is right up there too!!

I had included all my loathed words in the last paragraph of my last blog, trying to be funny.   *Whispers*... I don't think anyone noticed my feeble attempts.

Ennyhoo, I love reading your own "suddenly tired of" phrases and please use my blog to add them in any time you feel like it.  Doesn't matter the subject matter I may have posted about.  Tired phrases are always fun to read as we see we're not alone!

This just in  ;-)  Sitting here with my bottle of A&W diet root beer.  Slugging away at it and almost done.

Oh.  Meant to say...I started a diet about three weeks ago.  One thing I wound up doing from the git-go was cease any bread/sandwiches/baked goods.  Not sure why I did that.  They are not evil.  I think I was trying to cut the intake of carbs and that seemed to be a good way.  Simple carbs.  Not complex carbs though I have not had hardly any taters in those three weeks.  I love potatoes in any form except  potato soup. So it HAS been a little bit harder for me to avoid much of those however.  Sugary type things are easier to avoid because the craving goes away after several weeks of having none.  I do have fruit smoothies though and a banana to hold me when I am extra hungry.  I dislike bananas, but I will eat them when I am desperate.

It's lunch time and I believe I will head into the kitchen and have my strawberry smoothie.  I use a cup of skim milk, 2 T of Hersey's Lite chocolate syrup at 40 calories  for two T.,  a cup of cut up fresh strawberries (I have found some great ones in a local store that taste GOOD!  Not like the wooden tasting hard things in other places), a sweetener packet, some ice cubes and turn the blender on.  Um Um Good.

My usual mish mash of talking.  I feel as though I am sitting at the kitchen table with you.

Things I am Suddenly Tired of + Reading the comments is a whole other blog and fun too.

Tain't much, that which I am tired of.  Just a few phrases that are over-used so much.  If words could ravel and turn ratty and worn, these several phrases would.

Come on media and TV talking heads...really now.  Can you change up  (that's one phrase right there I am "suddenly tired of" ) your phrases for a little refreshing change please?

What do I mean?  Well, the almost every other sentence from TV channel to channel (news) you hear "At the end of the day". Over-used by everyone including friends and local newspaper pundits.  Please.  Just say another phrase.  I know if you try there is one out there. As "later" "Finally"  nothing at all?

Then ya gots yer "going forward" thingy.  Please don't Announcers and Talking Heads. Please,  say something else.  What did you bunch of folks say before that phrase and the others I will mention here started up about ten years ago--- along with the "at the end of the day" horror.  I think the first time I heard that, it was a sports personality/coach, some such.  Oh, did it EVER catch on.

Lastly but not leastly...I just wanna not hear "Gone missing".  Got lost?  Disappeared?  Why use a British turn of phrase?  Sounds better?  More fancy?  To me, it sounds affected.  Get over yourselves media writers and speakers.  "Change it up" to another way instead of always saying the exact same set of words year in and year out.

I know what you're thinking.  Don't listen.  Usually I don't unless it is something I need to hear that will affect me.  But I will hear whatever talking they choose to say--- however they choose to say it--- with their key catch phrases, unfailingly.   These are the most often heard by me.  I know there have to be more. Just at the end of the day, going forward, 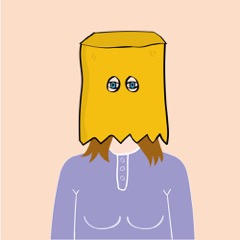 I would like to see medias change up their mode of speaking and writing or I will be gone missing from the telly, which usually I am except for Katie's baby shows she sleeps thorough in her recliner.